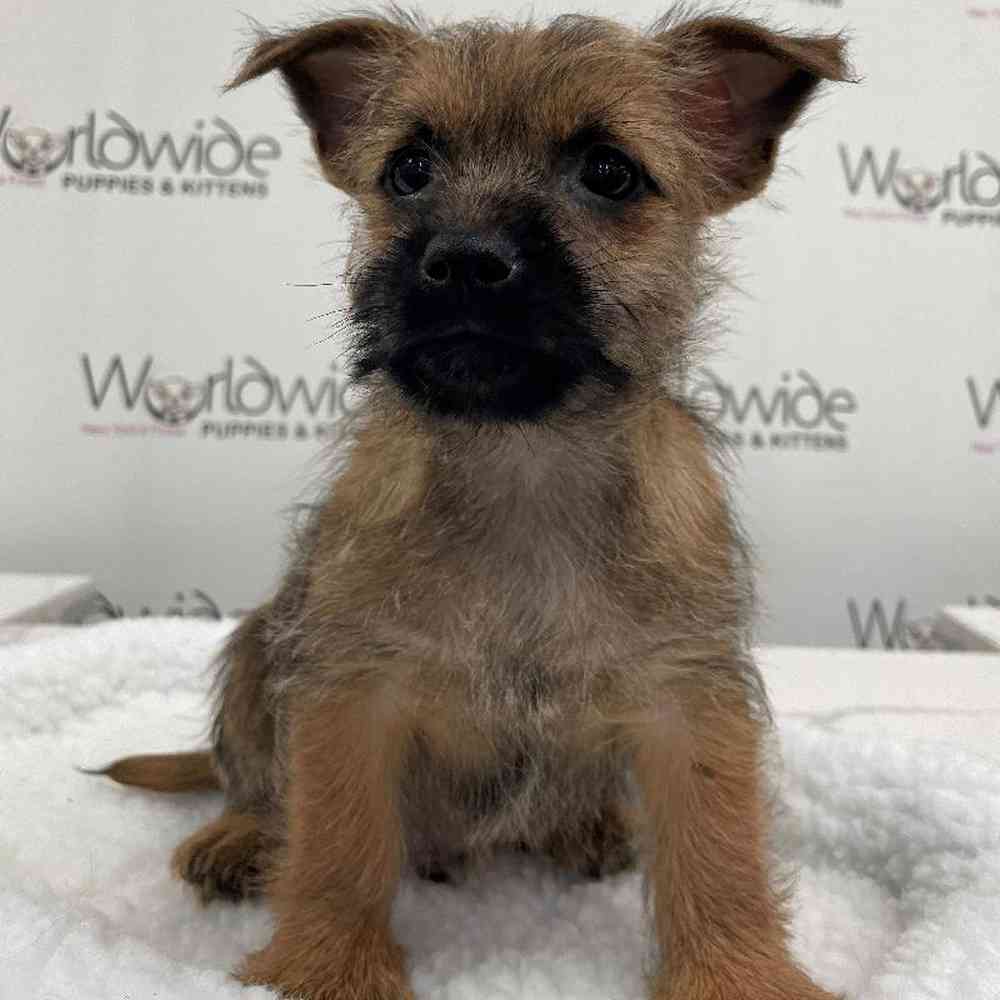 Cairn Terriers are happy, busy little earthdogs originally bred to fearlessly root out foxes and other small, furred prey in the rocky Scottish countryside. Curious and alert, Cairns like having a place where they can explore and dig.

That of an active, game, hardy, small working terrier of the short-legged class; very free in its movements, strongly but not heavily built, standing well forward on its forelegs, deep in the ribs, well coupled with strong hindquarters and presenting a wellproportioned build with a medium length of back, having a hard, weather-resisting coat; head shorter and wider than any other terrier and well furnished with hair giving a general foxy expression.

Skull - Broad in proportion to length with a decided stop and well furnished with hair on the top of the head, which may be somewhat softer than the body coat. Muzzle - Strong but not too long or heavy. Teeth-Large, mouth neither overshot nor undershot. Nose - Black. Eyes - Set wide apart, rather sunken, with shaggy eyebrows, medium in size, hazel or dark hazel in color, depending on body color, with a keen terrier expression. Ears - Small, pointed, well carried erectly, set wide apart on the side of the head. Free from long hairs.

Well-muscled, strong, active body with well-sprung, deep ribs, coupled to strong hindquarters, with a level back of medium length, giving an impression of strength and activity without heaviness. Shoulders, Legs and Feet: A sloping shoulder, medium length of leg, good but not too heavy bone; forelegs should not be out at elbows, and be perfectly straight, but forefeet may be slightly turned out.

Legs must be covered with hard hair. Pads should be thick and strong and dog should stand well up on its feet.

Involves the weight, the height at the withers and the length of body. Weight for bitches, 13 pounds; for dogs, 14 pounds. Height at the withers - bitches, 9½ inches; dogs, 10 inches. Length of body from 14¼ to 15 inches from the front of the chest to back of hindquarters. The dog must be of balanced proportions and appear neither leggy nor too low to ground; and neither too short nor too long in body. Weight and measurements are for matured dogs at two years of age. Older dogs may weigh slightly in excess and growing dogs may be under these weights and measurements.

May be of any color except white. Dark ears, muzzle and tail tip are desirable.

In proportion to head, well furnished with hair but not feathery. Carried gaily but must not curl over back. Set on at back level.

1. Skull - Too narrow in skull. 2. Muzzle - Too long and heavy a foreface; mouth overshot or undershot. 3. Eyes - Too large, prominent, yellow, and ringed are all objectionable. 4. Ears - Too large, round at points, set too close together, set too high on the head; heavily covered with hair. 5. Legs and Feet - Too light or too heavy bone. Crooked forelegs or out at elbow. Thin, ferrety feet; feet let down on the heel or too open and spread. Too high or too low on the leg. 6. Body - Too short back and compact a body, hampering quickness of movement and turning ability. Too long, weedy and snaky a body, giving an impression of weakness. Tail set on too low. Back not level. 7. Coat - Open coats, blousy coats, too short or dead coats, lack of sufficient undercoat, lack of head furnishings, lack of hard hair on the legs. Silkiness or curliness. A slight wave permissible. 8. Nose - Flesh or light-colored nose. 9. Color - White on chest, feet or other parts of body.

The Cairn’s unique qualities, called “Cairnishness,” include a short, wide head and a free-moving, short-legged body that exudes strength but not heaviness, topping out at about 10 inches high and about 15 inches long. The double coat is harsh and wiry on top and downy beneath. A Cairn presents as a small, shaggy, alert dog, with head, tail, and ears up, and eyes shining with intelligence. A British breed club promotes Cairns as the “best little pal in the world.” Cairns are small enough for a lap-top snuggle and sturdy enough for a good romp on the lawn. They do best with lots of close family contact. For owners who cherish the terrier qualities of gameness, independent thinking, and true-blue loyalty, no other breed will do.

The Cairn is one of several terrier breeds, some still extant others now extinct, who for centuries patrolled the game preserves and farms of Scotland. Unravelling the histories of these breeds is difficult because for so many years they were lumped together as simply Scotch terriers. Not until the late 1800s did breed fanciers devise strict breeding programs and classifications for this hardy family of exterminators. The name Cairn Terrier did not appear in print until 1887, though by then the Cairn-type terrier had been around for a long time. Cairns were known from at least the 1600s to dwell in the Western Highlands, most notably on the Isle of Skye, birthplace of their kinsman the Skye Terrier. Once upon a time in Scotland, a mound of stones used as a boundary or to mark a grave was called a “cairn.” On Highland game preserves, rodents would live within and beneath these rock piles. The Cairn Terrier, among the smallest of the go-to-ground terriers, was developed to dig into cairns and rout out the critters. When grouped in packs, these plucky little hunters also worked on foxes, otters, and other predators. The Cairn’s independence, courage, toughness, and alertness were qualities that served them well when digging into a cairn alone and confronting sharp-toothed mammals. By the turn of the 20th century, Britain’s terrier fanciers had sorted out the various Scotch earthdogs and began breeding Cairn, Scottish, Skye, and West Highland White terriers as distinct pure breeds. Cairns were exhibited at British dog shows of the era, and the AKC recognized the breed in 1913. The breed’s public profile received a tremendous boost in 1939, when a Cairn named Terry was chosen to play Toto in MGM’s production of “The Wizard of Oz.”

That of an active, game, hardy, small working terrier of the short-legged class; very free in its movements, strongly but not heavily built, standing well forward on its forelegs, deep in the ribs, well coupled with strong hindquarters and presenting a well-proportioned build with a medium length of back, having a hard, weather-resisting coat; head shorter and wider than any other terrier and well furnished with hair giving a general foxy expression.

The Cairn Terrier should do well on a high-quality dog food, whether commercially manufactured or home-prepared with your veterinarian’s supervision and approval. Any diet should be appropriate to the dog’s age (puppy, adult, or senior). Some dogs are prone to getting overweight, so watch your dog’s calorie consumption and weight level. Treats can be an important aid in training, but giving too many can cause obesity. Learn about which human foods are safe for dogs, and which are not. Check with your vet if you have any concerns about your dog’s weight or diet. Clean, fresh water should be available at all times.

Cairn Terriers are generally easy keepers, although weekly brushing and combing are recommended, as well as periodic hand-stripping to maintain the coat’s texture. Having a comb and soft slicker brush handy will help with the grooming tasks. With a new puppy, spending time together in grooming sessions helps to accustom him or her to being worked with and is an opportunity to develop the bond between you. The nails should be trimmed regularly, as overly long nails can cause the dog discomfort.

Cairns require a moderate amount of exercise and can adapt well to various living situations when given daily outings. They can thrive anywhere from a Highlands farm to an urban high-rise and are excellent all-around dogs. Training for dog sports provides an ideal outlet for their energy. The breed exercises body and mind by participating in obedience, tracking, herding, agility, earthdog events, coursing ability tests, and other activities that dog and owner can enjoy together.

Cairns are very smart and love their families, but they may try to test their owner’s limits, so obedience training is necessary. Although they learn quickly, the Cairn may always have the instinct to dig and chase small animals, so new owners should be prepared for these behaviors. Early socialization and puppy training classes are recommended and help to ensure that the dog grows into a well-adjusted, well-mannered companion.

Cairn Terriers are generally healthy dogs, and responsible breeders test their stock for health disorders and communicate with other dedicated breeders regularly, working together for breed health and preservation of the breed’s unique qualities. 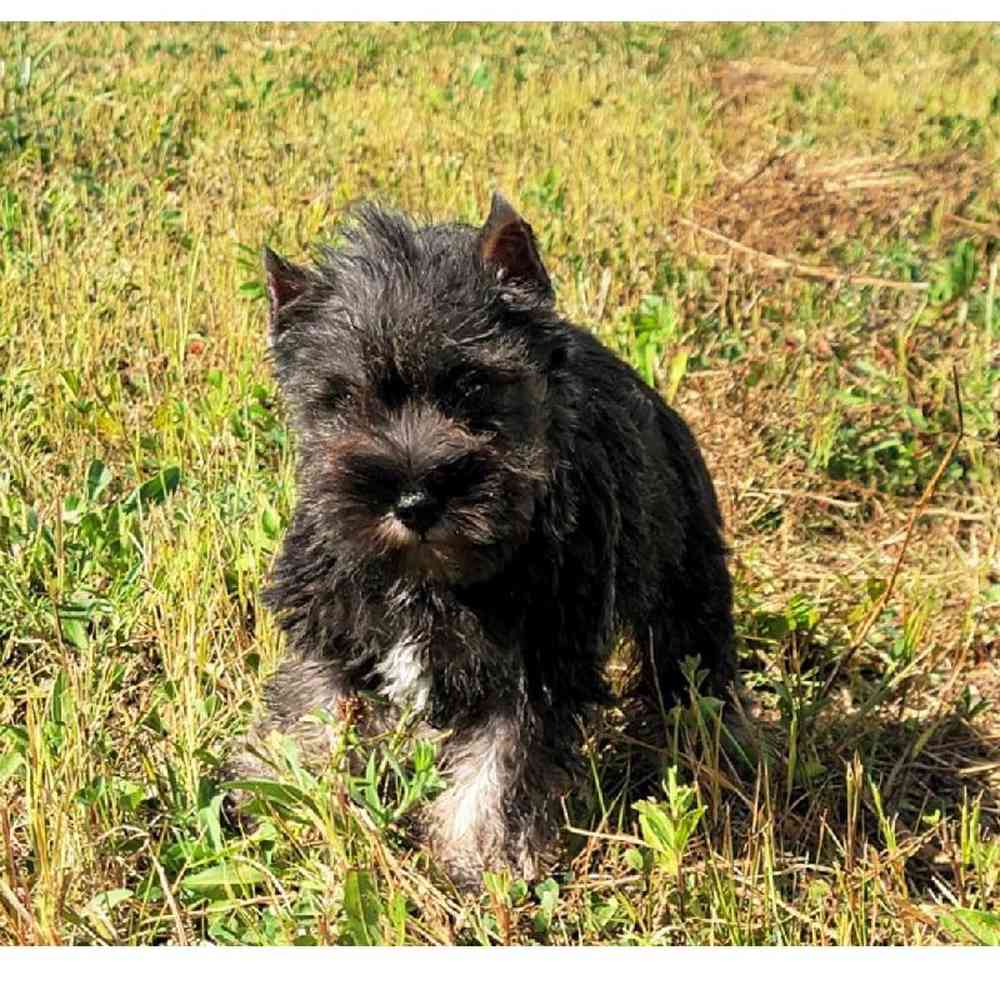 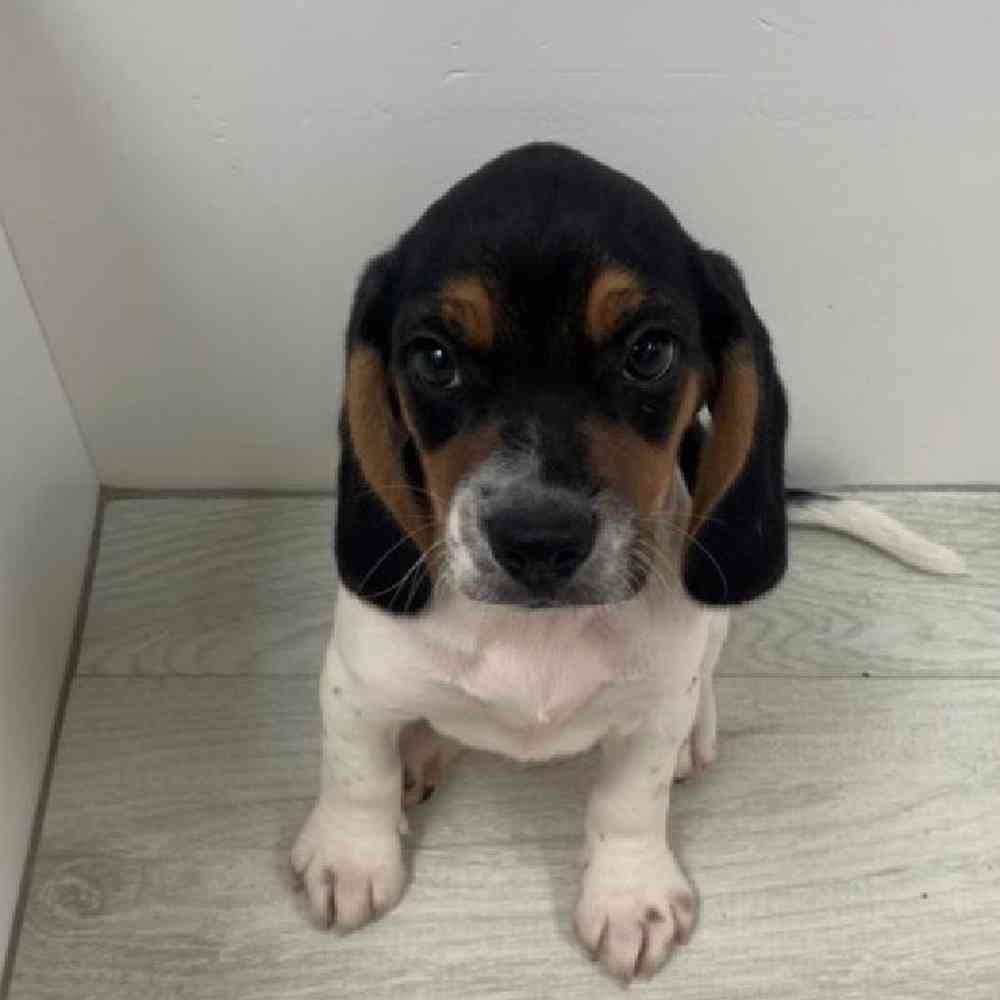 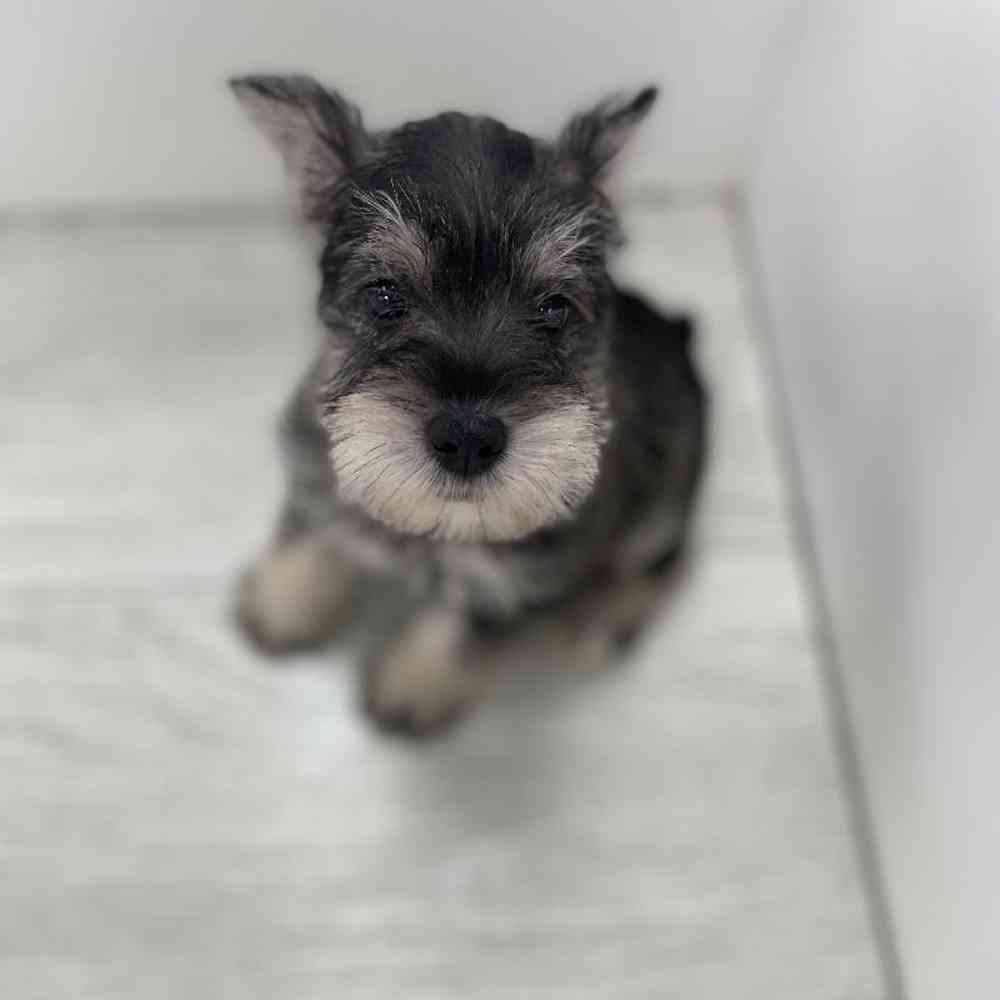 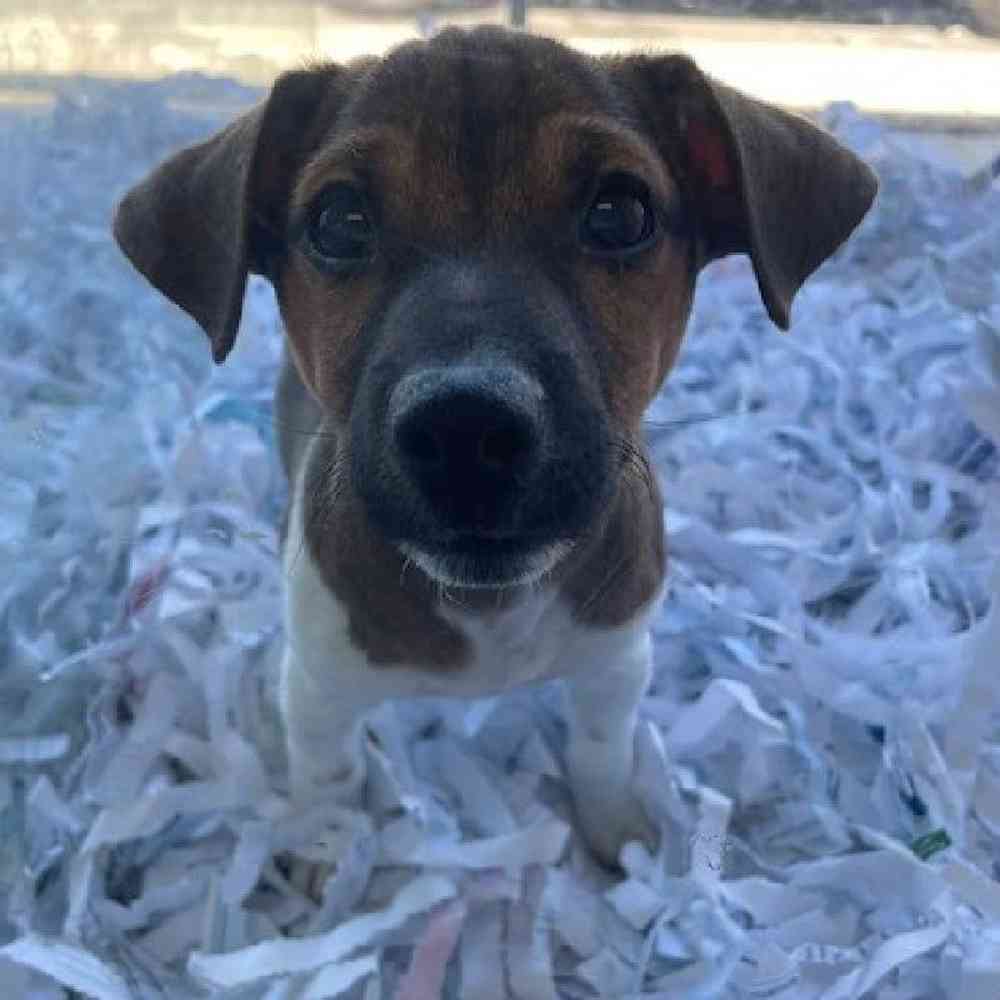