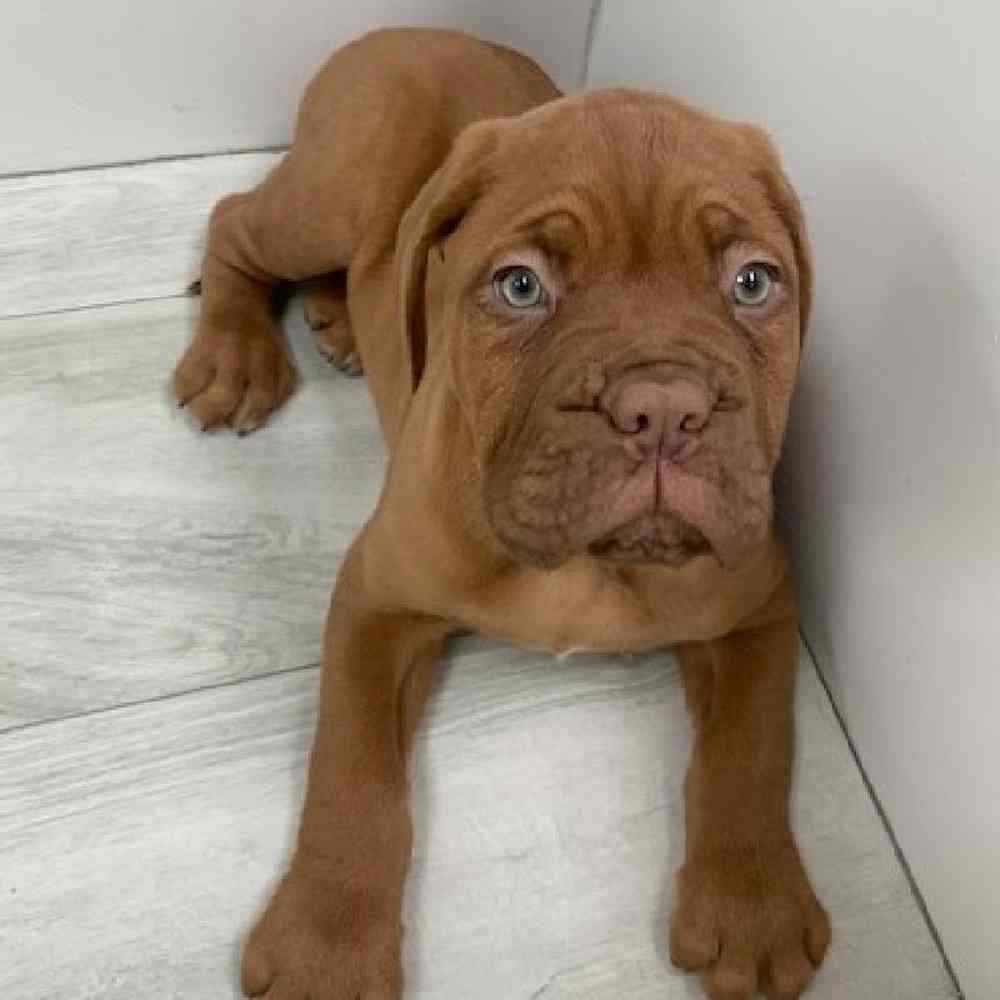 The most ancient of French dog breeds, the Dogue de Bordeaux (“Mastiff of Bordeaux”) was around even before France was France. These brawny fawn-coated guardians of considerable courage are famously loyal, affectionate, and protective.

The Dogue de Bordeaux is one of the most ancient French breeds. He is a typical brachycephalic molossoid type. He is a very powerful dog, with a very muscular body yet retaining a harmonious general outline. Built rather close to the ground, the distance from the deepest point of the chest to the ground is slightly less than the depth of the chest. A massive head with proper proportions and features is an important characteristic of the breed. His serious expression, stocky and athletic build, and self assurance make him very imposing. Bitches have identical characteristics, but less prominent.

The head is large, angular, broad, and rather short. It is trapezium shaped when viewed from above and in front. Eyes - Oval and set wide apart. The space between the eyes is equal to about twice the length of the eye (eye opening). Frank expression. The haw should not be visible. Color-hazel to dark brown for a dog with a black mask, lighter color tolerated but not sought after in dogs with either a brown mask or without a mask. Fault-Protruding eyes. Ears - The ear is small in proportion to the skull and of a slightly darker color than the coat. The front of the ears’ base is slightly raised. They should fall back, but not hang limply. The front edge of the ear is close to the cheek when the dog is attentive. The tip is slightly rounded, and should not reach beyond the eye. Set rather high, at the level of the upper line of the skull, thus emphasizing the skull width even more. Skull - Back Skull in the male: The perimeter of the skull measured at the point of its greatest width corresponds roughly to the height at the withers. In bitches it may be slightly less. Its volume and shape are the result of the spacing of the lower jaw bones, and the very well developed temporal area, upper-orbital area, and zygomatic arches. The cheeks are prominent due to the very strong development of the muscles. The skull is slightly rounded from one side to the other. The frontal groove is deep. The forehead, characterized by well developed eyebrows, dominates the face. However the skull is still wider than high. The head is furrowed with symmetrical wrinkles on each side of the median groove. These deep ropes of wrinkle are mobile depending on whether the dog is attentive or not. Stop - The stop is very pronounced, almost forming a right angle with the muzzle (95 to 100 degrees). Fault - Extreme characteristics such as a very short muzzle, flat skull and a swollen fold behind the nose. Muzzle - Powerful, broad, thick, and rather short. Should not be fleshy below the eyes. When viewed in profile, the foreface is very slightly concave with moderately obvious folds. Its width decreases only slightly from the root of the muzzle to the tip. When viewed from above it has the general shape of a square. When viewed from the side, the top lines of the skull and muzzle form an angle that converges at, or near the end of the muzzle. When the head is held horizontally, the end of the muzzle, which is truncated, thick and broad at the base, is in front of a vertical tangent to the front of the nose (The nose is slightly set back from the front of the muzzle.). Its perimeter is almost two thirds of that of the head. Its length varies between one third and one quarter of the total length of the head, measured from the nose to the occipital crest. The ideal length of the muzzle is between these two extremes. Nose - Broad, with well opened nostrils. Self colored according to the color of the mask. Slightly upturned permissible. Upper lip - Thick, moderately pendulous yet retractile. When viewed in profile it shows a rounded lower line and covers the lower jaw on the sides. When viewed from the front, the edge of the upper lip is in contact with the lower lip, and drops on either side thus forming an inverse, wide V. Jaws - Very powerful, and broad. Undershot so that there is no contact between the upper and lower incisors. The lower jaw curves upwards. The chin is very pronounced and should neither overlap the upper lip exaggeratedly nor be covered by it. Disqualification - Mouth not undershot; wry jaw. Bite - Undershot. Fault - Incisors constantly visible when the mouth is closed. Severe Fault - Canines constantly visible when the mouth is closed. Teeth - Strong, particularly the canines. Lower, canines set wide apart and slightly curved. Incisors well aligned especially in the lower jaw where they form a straight line. Severe Fault - Long narrow head with insufficiently pronounced stop, with a muzzle measuring more than a third of the total length of the head (lack of type in head).

Neck - Very strong and muscular, almost cylindrical. The skin is supple, ample and loose. The average circumference almost equals that of the head. There is a noticeable, slightly convex, furrow at the junction of the head and neck. The well-defined dewlap starts at the level of the throat forming folds down to the chest, without hanging exaggeratedly. The neck is very broad at its base, merging smoothly with the shoulders. Topline - Solid with a broad and muscular back, withers well marked, broad loin, rather short and solid. Chest - Powerful, long, deep, broad, and let down lower than the elbows. The forechest is broad and powerful with a lower line that is convex towards the bottom. The ribcage is deep and well sprung, but not barrel shaped. The circumference of the chest should be between 10 and 12 inches greater than the height at the withers. Underline - Curved, from the deep brisket to the firm abdomen. Slight to moderate tuck-up. Should be neither pendulous nor extreme. Croup - Moderately sloping down to the root of the tail. Tail - Very thick at the base. The tip preferably reaches the hock but not below. Carried low, it is neither broken nor kinked but supple. Hanging when the dog is in repose; generally carried level with the back or slightly above the level of the back when the dog is in action, without curving over the back or being curled. Fault - Fused vertebrae but not kinked. Disqualification - An atrophied tail or a tail that is knotted and laterally deviated or twisted.

Strong bone structure, legs very muscular. Shoulders - Powerful, prominent muscles. Slant of shoulder - blade is medium (about 45 degrees to the horizontal), with the angle of the scapular-humeral articulation being a little more than 90 degrees. Arms - Very muscular. Elbows - In line with the body. Should be neither too close to the chest nor turned out. Forearms - When viewed from the front, straight or inclining slightly inwards, especially in dogs with a very broad chest. When viewed in profile, vertical. Pasterns - Powerful. Slightly sloping when viewed in profile. When viewed from the front, may bend slightly outwards, thus compensating for the slight inclination of the forearm inwards. Feet - Strong. Toes should be tight, nails curved and strong, and pads well developed and supple; the Dogue is well up on his toes despite his weight.

Powerful legs with strong bone structure; well angulated. When viewed from behind, the hindquarters are parallel and vertical thus giving an impression of power. The hindquarters are not quite as broad as the forequarters. Thigh - Well developed and thick with visible muscles. Stifle – In a parallel plane to the median plane or slightly out. Second Thigh - Relatively short, well muscled. Hock Joint - Short and sinewy, with the angle of the hock joint moderately open. Hock - Strong, no dewclaws. Hind feet - Slightly longer than the front feet, toes should be tight.

Fine, short and soft to the touch. Skin - Thick and sufficiently loose fitting.

Coat - Self-colored, in all shades of fawn, from a dark red fawn to a light fawn. A rich coat color is considered desirable. Limited white patches are permissible on the chest and the extremities of the limbs. Fault: White on the tip of the tail, or on the front part of the forelegs above the carpus and the tarsus. Disqualification - White on the head or body, or any coat color other than shades of fawn. Black Mask - The mask is often only slightly spread out and should not invade the cranial region. There may be slight black shading on the skull, ears, neck and back. Pigmentation of the nose will be black. Brown Mask - Pigmentation of the nose and eye rims will also be brown. No Mask - The coat is fawn: the skin appears red (also formerly called "red mask"). The nose is then reddish or pink.

The gait is quite supple for a molossoid. In open walking the movement is free, supple, close to the ground. Good drive from the hindquarters, good extension of the forelegs, especially at the trot, which is the preferred gait. As the trot quickens, the head tends to drop, the topline inclines towards the front, and the front feet get closer to the median plane while striding out with a long reaching movement. Vertical movement while in a short gallop is rather important. He is capable of great speed over short distances by bolting along close to the ground.

Dogue de Bordeaux is gifted for guarding, which he assumes with vigilance and great courage but without aggressiveness. He is a very good companion, being attached to and affectionate toward his master. He is calm and balanced with a high stimulus threshold. The male normally has a dominant character.

Mouth not undershot; wry jaw. An atrophied tail or a tail that is knotted and laterally deviated or twisted. White on the head or body, limited white patches permissible on the chest and the extremities of the limbs, or any coat color other than shades of fawn. 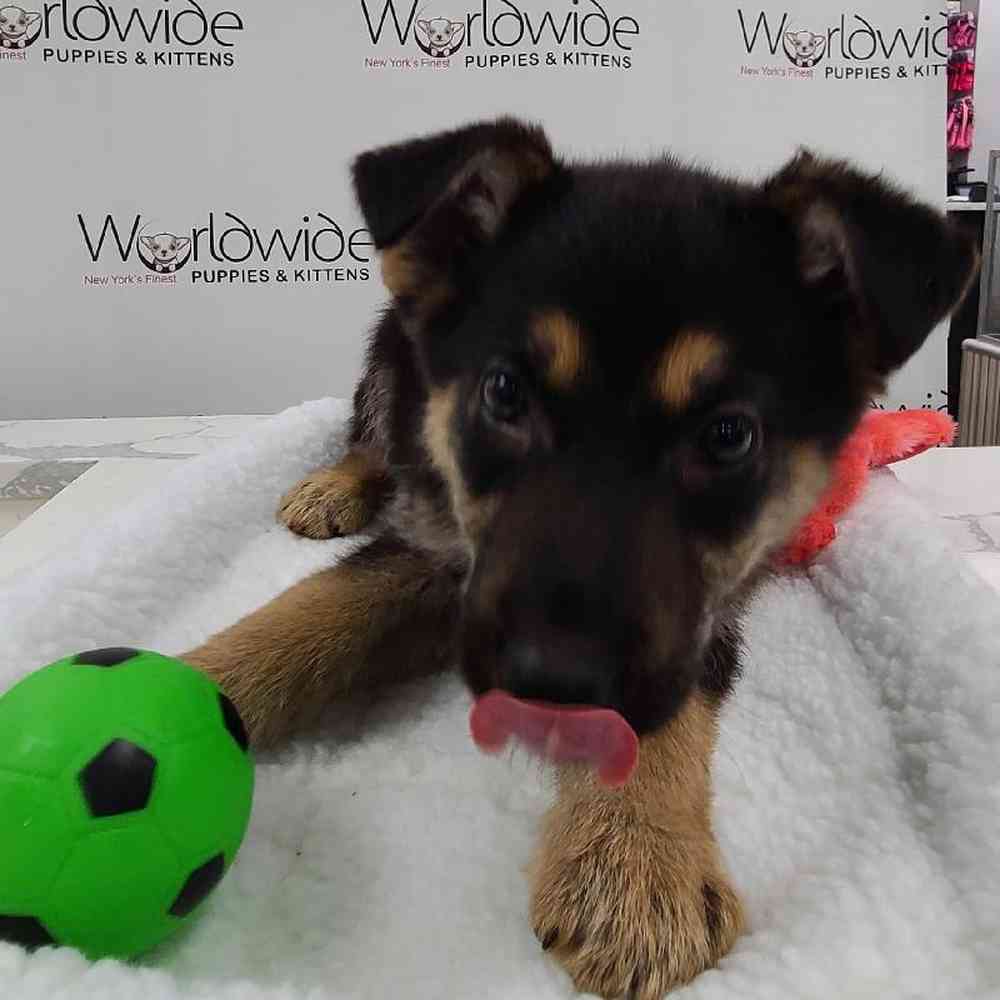 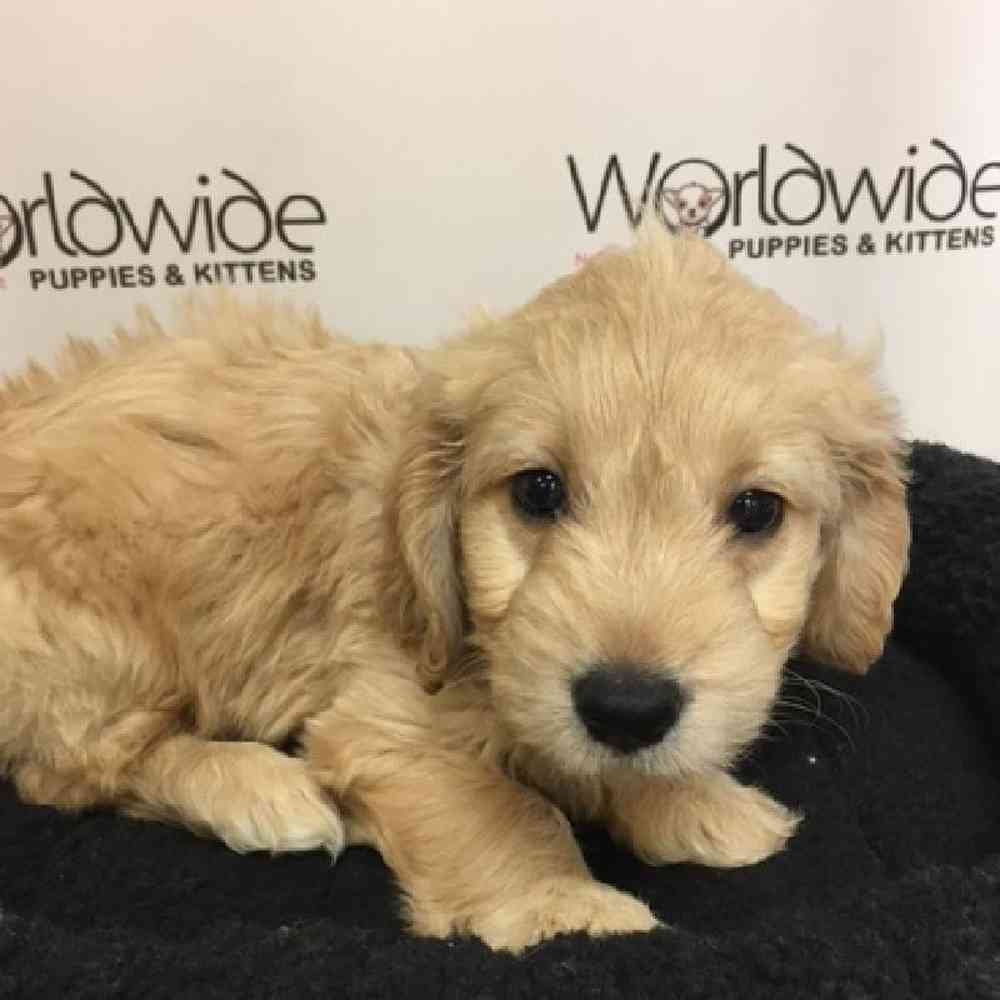 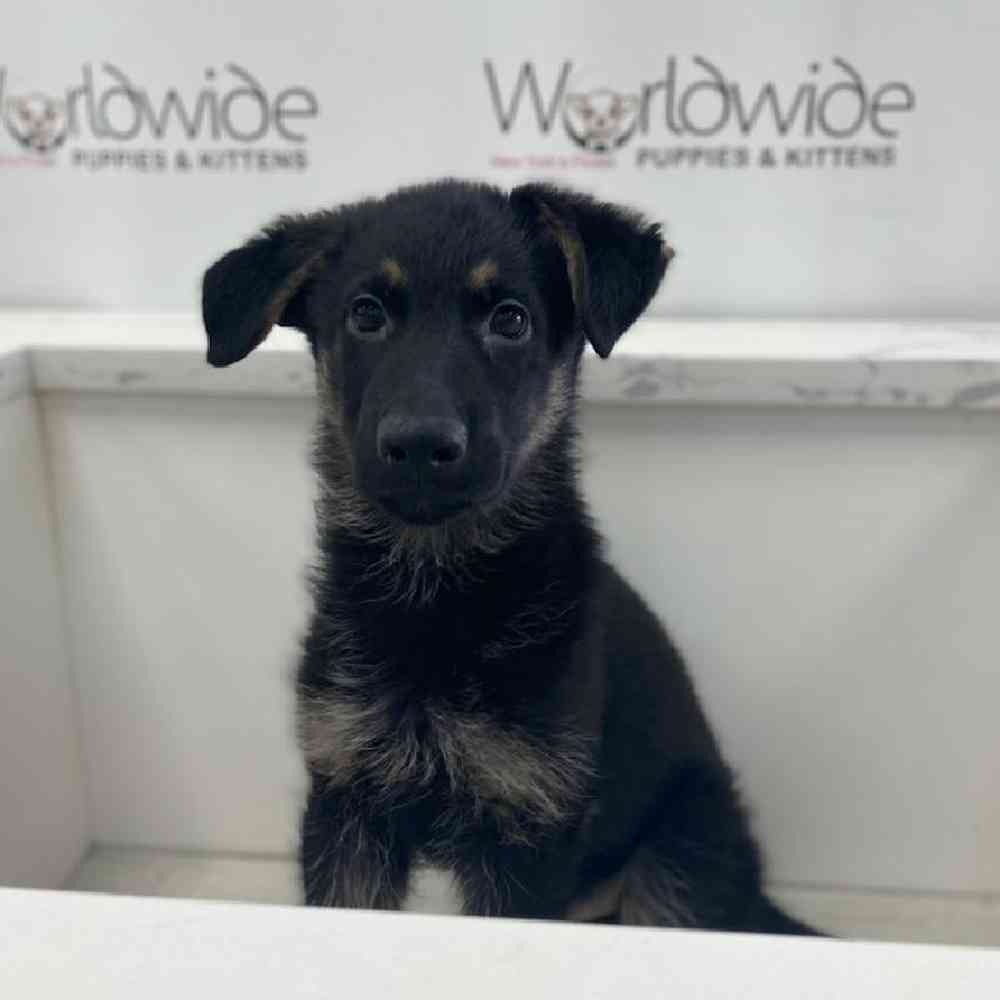 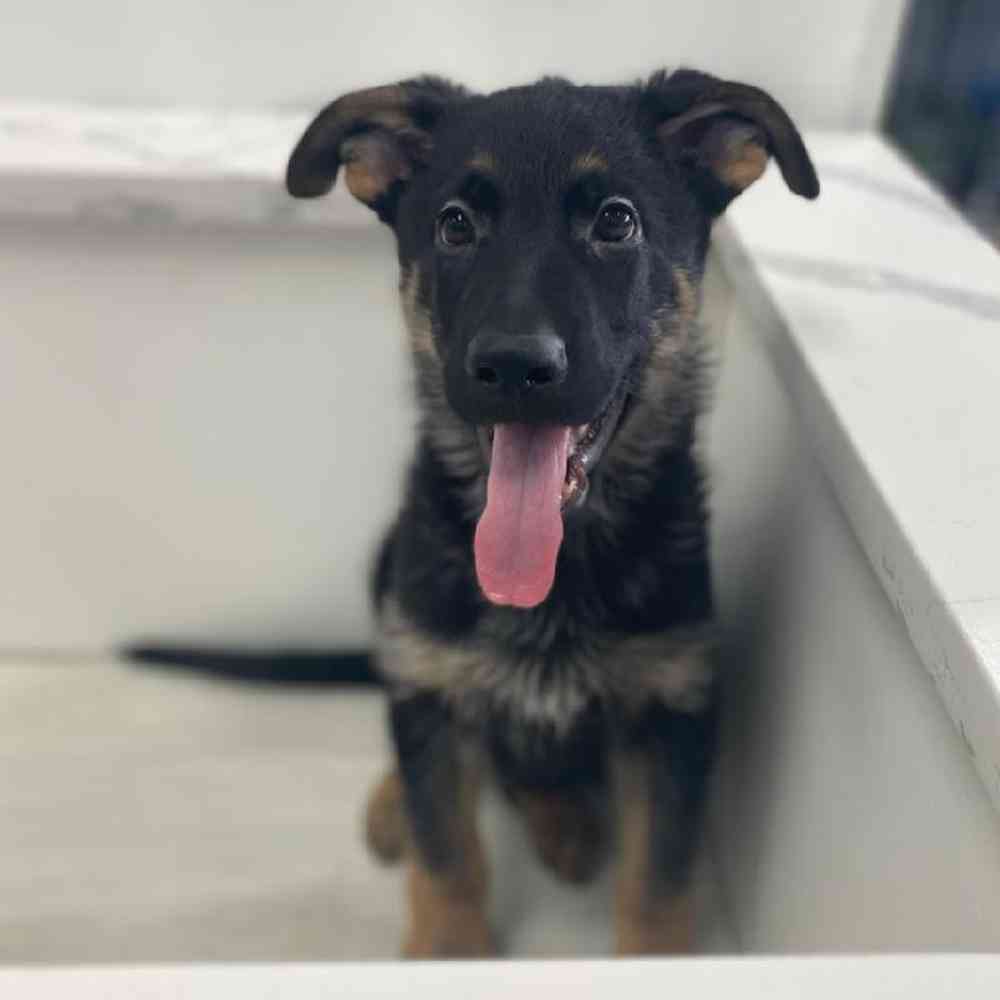